The environment is the data structure that powers scoping. This chapter dives deep into environments, describing their structure in depth, and using them to improve your understanding of the four scoping rules described in Section 6.4. Understanding environments is not necessary for day-to-day use of R. But they are important to understand because they power many important R features like lexical scoping, namespaces, and R6 classes, and interact with evaluation to give you powerful tools for making domain specific languages, like dplyr and ggplot2.

If you can answer the following questions correctly, you already know the most important topics in this chapter. You can find the answers at the end of the chapter in Section 7.7.

This chapter will use rlang functions for working with environments, because it allows us to focus on the essence of environments, rather than the incidental details.

The env_ functions in rlang are designed to work with the pipe: all take an environment as the first argument, and many also return an environment. I won’t use the pipe in this chapter in the interest of keeping the code as simple as possible, but you should consider it for your own code.

Generally, an environment is similar to a named list, with four important exceptions:

Let’s explore these ideas with code and pictures.

Use new.env() to create a new environment. Ignore the hash and size parameters; they are not needed. You cannot simultaneously create and define values; use $<-, as shown below.

Printing an environment just displays its memory address, which is not terribly useful:

Instead, we’ll use env_print() which gives us a little more information:

In R 3.2.0 and greater, use names() to list the bindings in an environment. If your code needs to work with R 3.1.0 or earlier, use ls(), but note that you’ll need to set all.names = TRUE to show all bindings.

To compare environments, you need to use identical() and not ==. This is because == is a vectorised operator, and environments are not vectors.

To save space, I typically won’t draw all the ancestors; just remember whenever you see a pale blue circle, there’s a parent environment somewhere.

You can find the parent of an environment with env_parent():

The ancestors of every environment eventually terminate with the empty environment. You can see all ancestors with env_parents():

Use parent.env() to find the parent of an environment. No base function returns all ancestors.

If <<- doesn’t find an existing variable, it will create one in the global environment. This is usually undesirable, because global variables introduce non-obvious dependencies between functions. <<- is most often used in conjunction with a function factory, as described in Section 10.2.4.

You can get and set elements of an environment with $ and [[ in the same way as a list:

$ and [[ will return NULL if the binding doesn’t exist. Use env_get() if you want an error:

If you want to use a default value if the binding doesn’t exist, you can use the default argument.

There are two other ways to add bindings to an environment:

You can determine if an environment has a binding with env_has():

Unlike lists, setting an element to NULL does not remove it, because sometimes you want a name that refers to NULL. Instead, use env_unbind():

Unbinding a name doesn’t delete the object. That’s the job of the garbage collector, which automatically removes objects with no names binding to them. This process is described in more detail in Section 2.6.

See get(), assign(), exists(), and rm(). These are designed interactively for use with the current environment, so working with other environments is a little clunky. Also beware the inherits argument: it defaults to TRUE meaning that the base equivalents will inspect the supplied environment and all its ancestors.

There are two more exotic variants of env_bind():

If you want to operate on every ancestor of an environment, it’s often convenient to write a recursive function. This section shows you how, applying your new knowledge of environments to write a function that given a name, finds the environment where() that name is defined, using R’s regular scoping rules.

The definition of where() is straightforward. It has two arguments: the name to look for (as a string), and the environment in which to start the search. (We’ll learn why caller_env() is a good default in Section 7.5.)

There are three cases:

These three cases are illustrated with these three examples:

It might help to see a picture. Imagine you have two environments, as in the following code and diagram:

It’s natural to work with environments recursively, so where() provides a useful template. Removing the specifics of where() shows the structure more clearly:

It’s possible to use a loop instead of recursion. I think it’s harder to understand than the recursive version, but I include it because you might find it easier to see what’s happening if you haven’t written many recursive functions.

7.4.1 Package environments and the search path

If you follow all the parents back, you see the order in which every package has been attached. This is known as the search path because all objects in these environments can be found from the top-level interactive workspace. You can see the names of these environments with base::search(), or the environments themselves with rlang::search_envs():

The last two environments on the search path are always the same:

Note that when you attach another package with library(), the parent environment of the global environment changes:

A function binds the current environment when it is created. This is called the function environment, and is used for lexical scoping. Across computer languages, functions that capture (or enclose) their environments are called closures, which is why this term is often used interchangeably with function in R’s documentation.

You can get the function environment with fn_env():

In diagrams, I’ll draw a function as a rectangle with a rounded end that binds an environment. 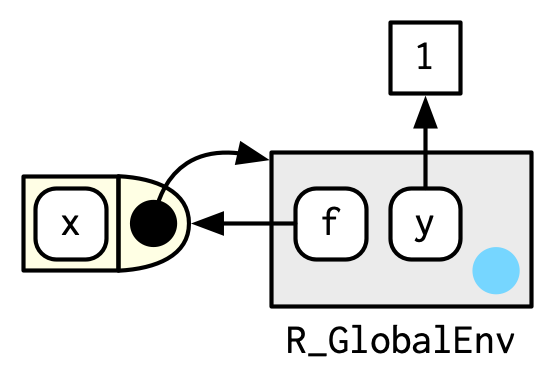 In this case, f() binds the environment that binds the name f to the function. But that’s not always the case: in the following example g is bound in a new environment e, but g() binds the global environment. The distinction between binding and being bound by is subtle but important; the difference is how we find g versus how g finds its variables. 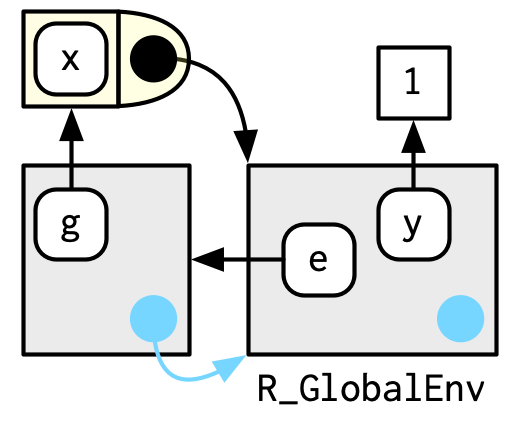 In the diagram above, you saw that the parent environment of a package varies based on what other packages have been loaded. This seems worrying: doesn’t that mean that the package will find different functions if packages are loaded in a different order? The goal of namespaces is to make sure that this does not happen, and that every package works the same way regardless of what packages are attached by the user.

sd() is defined in terms of var(), so you might worry that the result of sd() would be affected by any function called var() either in the global environment, or in one of the other attached packages. R avoids this problem by taking advantage of the function versus binding environment described above. Every function in a package is associated with a pair of environments: the package environment, which you learned about earlier, and the namespace environment. 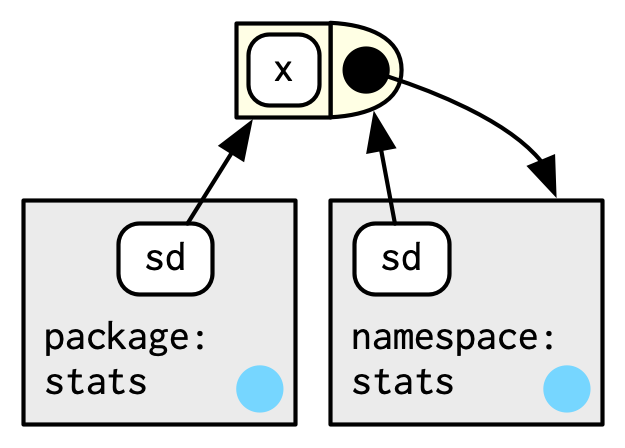 Every namespace environment has the same set of ancestors:

Putting all these diagrams together we get: 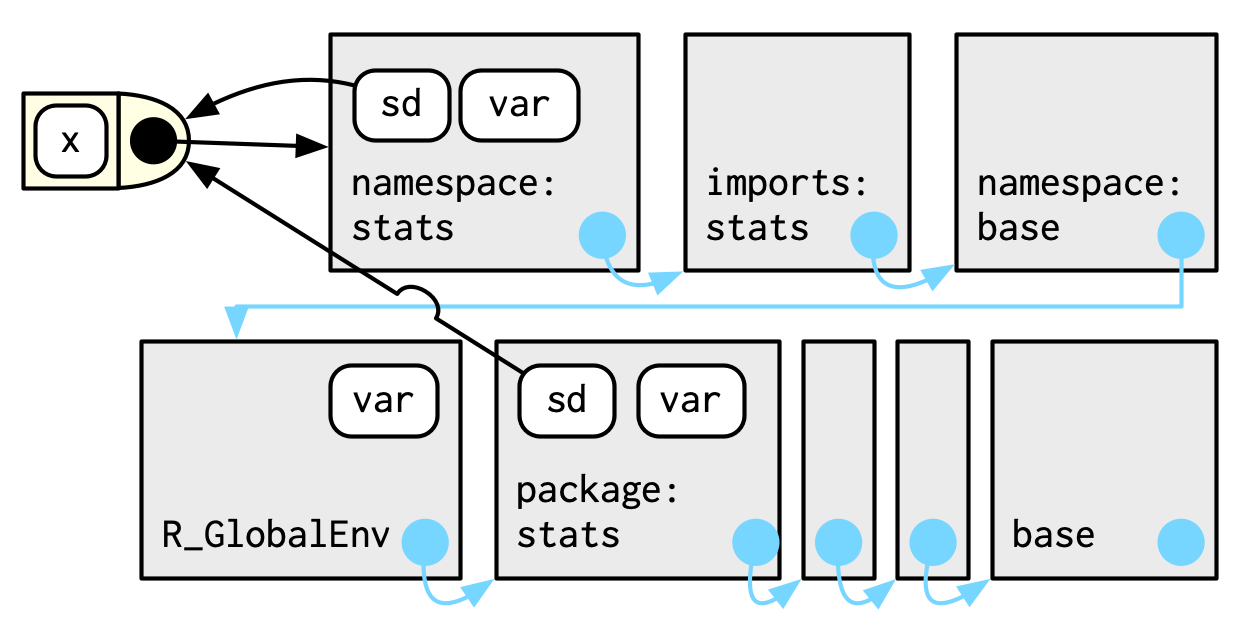 So when sd() looks for the value of var it always finds it in a sequence of environments determined by the package developer, but not by the package user. This ensures that package code always works the same way regardless of what packages have been attached by the user.

There’s no direct link between the package and namespace environments; the link is defined by the function environments.

The last important topic we need to cover is the execution environment. What will the following function return the first time it’s run? What about the second?

Think about it for a moment before you read on. 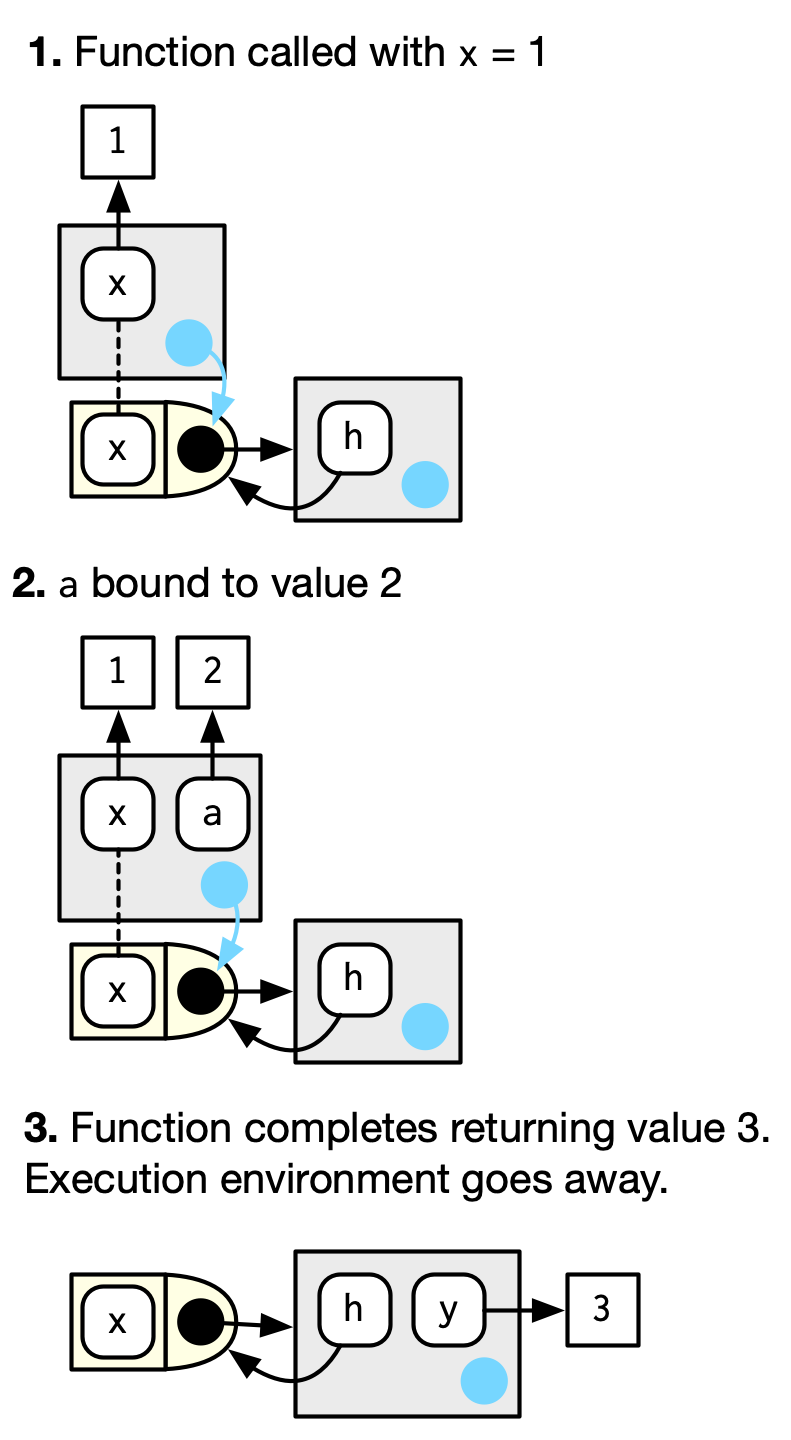 An execution environment is usually ephemeral; once the function has completed, the environment will be garbage collected. There are several ways to make it stay around for longer. The first is to explicitly return it:

Another way to capture it is to return an object with a binding to that environment, like a function. The following example illustrates that idea with a function factory, plus(). We use that factory to create a function called plus_one(). 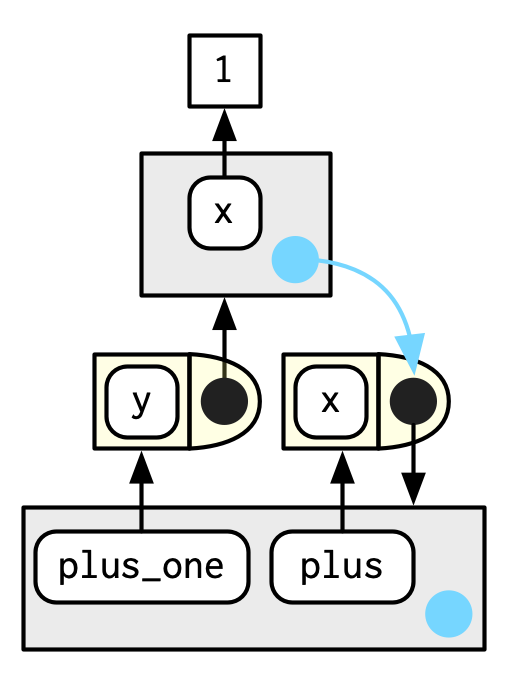 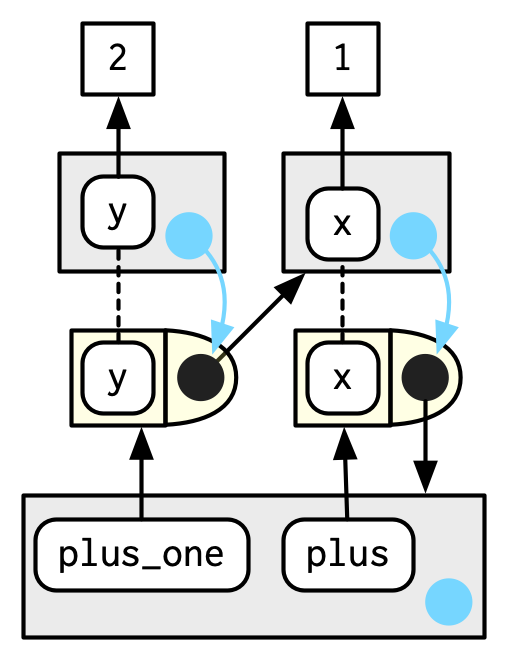 parent.frame() is equivalent to caller_env(); just note that it returns an environment, not a frame.

The way you most commonly see a call stack in R is by looking at the traceback() after an error has occurred:

The call stack above is simple: while you get a hint that there’s some tree-like structure involved, everything happens on a single branch. This is typical of a call stack when all arguments are eagerly evaluated.

Let’s create a more complicated example that involves some lazy evaluation. We’ll create a sequence of functions, a(), b(), c(), that pass along an argument x.

Each element of the call stack is a frame44, also known as an evaluation context. The frame is an extremely important internal data structure, and R code can only access a small part of the data structure because tampering with it will break R. A frame has three key components: 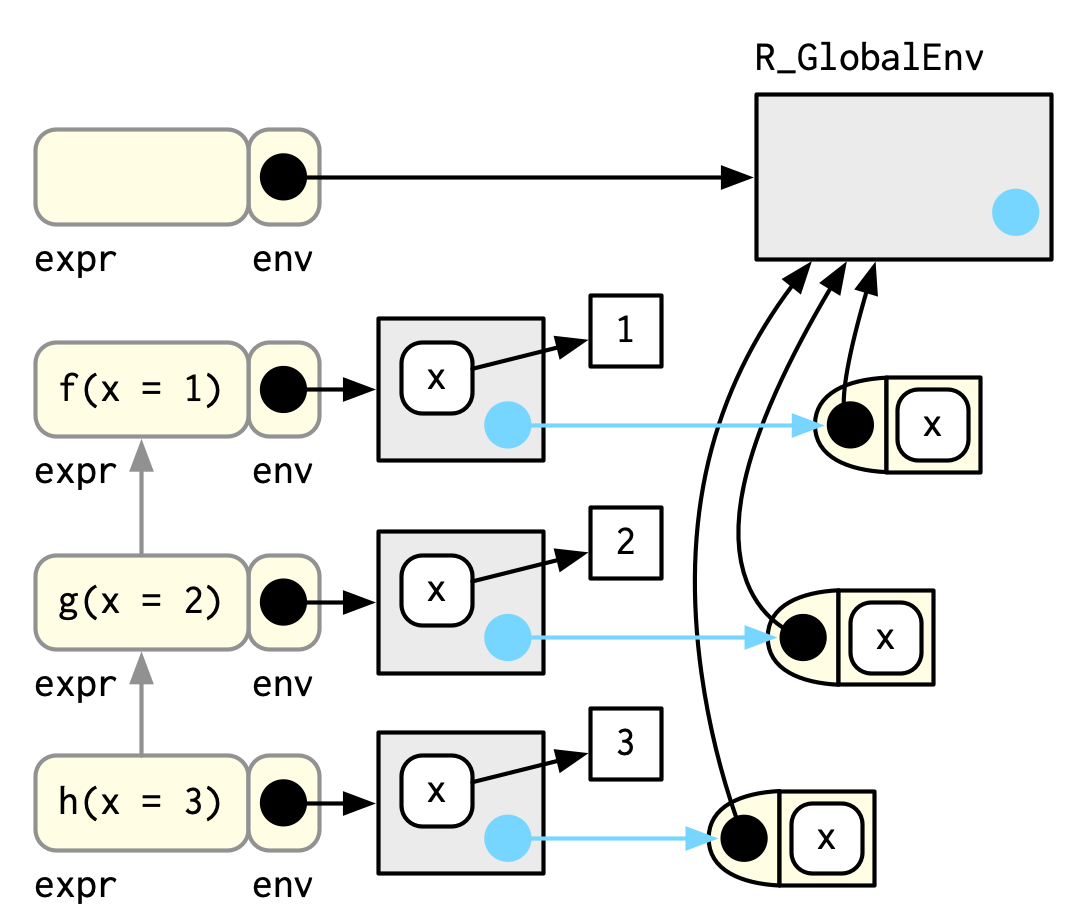 Figure 7.2: The graphical depiction of a simple call stack

(To focus on the calling environments, I have omitted the bindings in the global environment from f, g, and h to the respective function objects.)

The frame also holds exit handlers created with on.exit(), restarts and handlers for the condition system, and which context to return() to when a function completes. These are important internal details that are not accessible with R code.

Looking up variables in the calling stack rather than in the enclosing environment is called dynamic scoping. Few languages implement dynamic scoping (Emacs Lisp is a notable exception.) This is because dynamic scoping makes it much harder to reason about how a function operates: not only do you need to know how it was defined, you also need to know the context in which it was called. Dynamic scoping is primarily useful for developing functions that aid interactive data analysis, and one of the topics discussed in Chapter 20.

As well as powering scoping, environments are also useful data structures in their own right because they have reference semantics. There are three common problems that they can help solve: