R, at its heart, is a functional language. This means that it has certain technical properties, but more importantly that it lends itself to a style of problem solving centred on functions. Below I’ll give a brief overview of the technical definition of a functional language, but in this book I will primarily focus on the functional style of programming, because I think it is an extremely good fit to the types of problem you commonly encounter when doing data analysis.

Recently, functional techniques have experienced a surge in interest because they can produce efficient and elegant solutions to many modern problems. A functional style tends to create functions that can easily be analysed in isolation (i.e. using only local information), and hence is often much easier to automatically optimise or parallelise. The traditional weaknesses of functional languages, poorer performance and sometimes unpredictable memory usage, have been much reduced in recent years. Functional programming is complementary to object-oriented programming, which has been the dominant programming paradigm for the last several decades.

Firstly, functional languages have first-class functions, functions that behave like any other data structure. In R, this means that you can do many of the things with a function that you can do with a vector: you can assign them to variables, store them in lists, pass them as arguments to other functions, create them inside functions, and even return them as the result of a function.

Secondly, many functional languages require functions to be pure. A function is pure if it satisfies two properties:

Pure functions are much easier to reason about, but obviously have significant downsides: imagine doing a data analysis where you couldn’t generate random numbers or read files from disk.

Strictly speaking, R isn’t a functional programming language because it doesn’t require that you write pure functions. However, you can certainly adopt a functional style in parts of your code: you don’t have to write pure functions, but you often should. In my experience, partitioning code into functions that are either extremely pure or extremely impure tends to lead to code that is easier to understand and extends to new situations.

It’s hard to describe exactly what a functional style is, but generally I think it means decomposing a big problem into smaller pieces, then solving each piece with a function or combination of functions. When using a functional style, you strive to decompose components of the problem into isolated functions that operate independently. Each function taken by itself is simple and straightforward to understand; complexity is handled by composing functions in various ways.

The following three chapters discuss the three key functional techniques that help you to decompose problems into smaller pieces:

Collectively, these types of function are called higher-order functions and they fill out a two-by-two table: 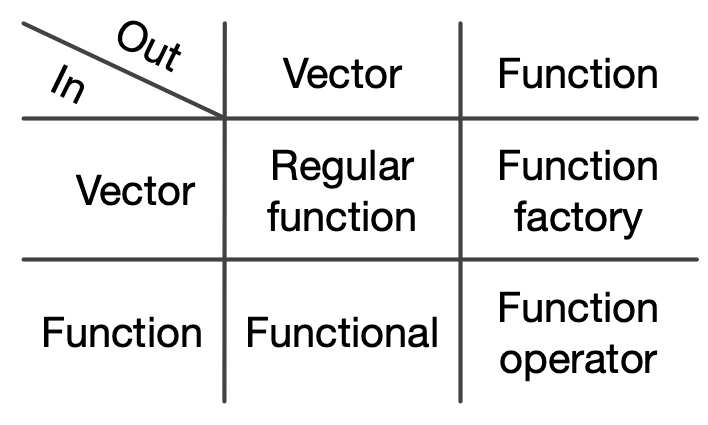